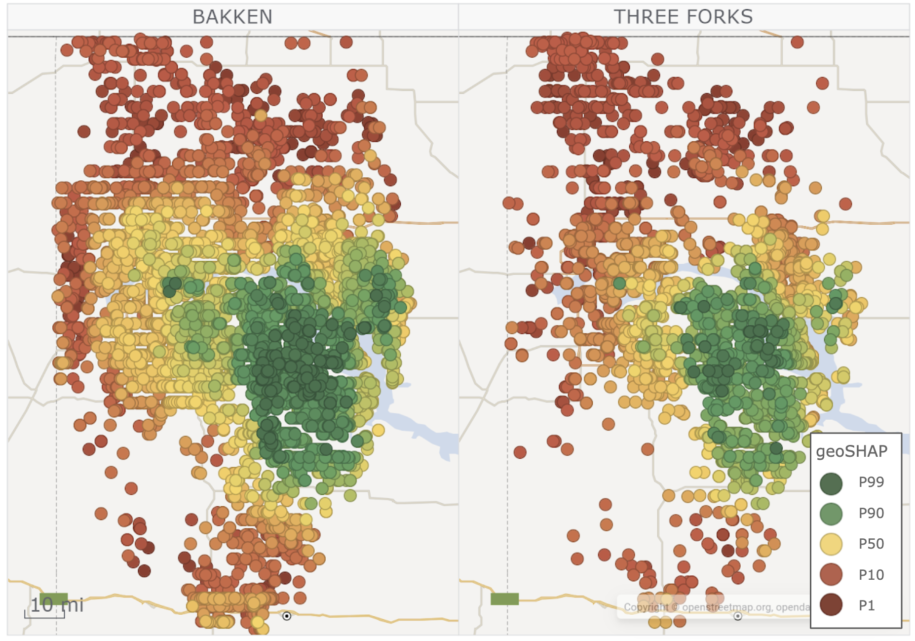 90% of American drivers say they’re better than average, and 90% of Shale focused Operators have “peer-leading” breakevens, returns and well production forecasts. Suuuure they do! How do you cut through Investor Relations fluff to identify top-performing operators to learn from, or underperformers to acquire? We will use machine learning to build unbiased benchmarks for oil and gas financial modeling.

Establishing a proper baseline is the subject of Novi’s upcoming URTeC 2020 paper, Benchmarking Operator Performance in the Williston Basin using a Predictive Machine Learning Model. In that paper, we propose two different, unbiased benchmarks that come out of our machine learning oil and gas models. First, the model’s estimate of the total rock quality (we call this geoSHAP). Second, we look for consistent over or underperformance relative to our model’s predictions — using the “known unknowns” of the model to our advantage, identifying who’s doing well on the decisions (such as choke management or lift type) unknown to the oil and gas model.

Our machine learning models learn what geologic variables lead to high production, just like they learn from completions or spacing parameters. To train this model, we used stratigraphic tops, log measurements, and mudlog geochemistry from the NDIC to generate hundreds of derived geologic properties, which we then ran through a principal components analysis to reduce down to five features that were fed to the model.

GeoSHAP does a good job predicting actual production. Most operators follow a simple trend of increasing average production as their average geoSHAP increases. A few small operators (<5 wells) deviate from the trend, which can be attributable to natural well variation over small sample sizes, but one large operator stands head and shoulders over the rest with similar rock quality: EOG.

Digging deeper into EOG’s outperformance in the Bakken

Let’s dig a little deeper into EOG’s outperformance by looking at how it changes through time. In 2013, EOG was crushing the competition, producing several times per well higher than their “peers.” In 2015, they fall back to earth as they go to lower-quality rock, and by 2017, the rest of the pack has caught up with them.

We can see how their drilled rock quality changes through time. In 2013, they were drilling some of the highest-quality rock in the basin in the Parshall-Sanish area and along the east side of the Nesson Anticline. As the years went on, EOG moved to lower-quality rock outside the Parshall core.

The other component of EOG’s stellar performance? Large jobs. EOG deployed completions with high proppant loading way before their competitors in the basin, putting away over 1300 #/ft on average in 2013 — much higher than most Williston operators use, even today.

Proppant and geology are known to the oil and gas model — so if those are the main drivers of EOG’s outperformance, then EOG’s actual production should be close to the model prediction– and that’s exactly what we found.

Marathon, by contrast, falls near the bottom of their peers in actual production compared to model prediction. Here, we’ll use the model’s known unknowns to our advantage. As a reminder, the model has seen the gross completions variables (proppant volume, fluid volume, stage count), a range of geology variables, and spacing at the time of frac.

Operational choices should have a changing impact over the life of the well — they should change the shape of the production curve. So, let’s look at how Marathon’s performance relative to model prediction varies through time.

Marathon starts off 22% above model prediction at IP30 and ends 29% below oil and gas modeling prediction for IP720 (both cum oil). As you can see from the above chart, the distance Marathon covers in actual-predicted space through time is larger than almost all other operators. Artificial lift type or choke management could definitely be the cause of this behavior — a spot check of the Brush 24-8H well (NDIC File #30550, shows similar behavior to the Marathon average) shows an IP test flowed at 55/64″ choke, and an ESP installed 10 weeks after the IP test–both possible contributors to high early-time production and low later-time production.

Conclusions: Use of Machine learning benchmarks for oil and gas financial modeling