First large bankruptcy filing begs the question :: is there hidden value in Whiting’s un-drilled acreage worth bidding on?

HomeDrilling OptimizationFirst large bankruptcy filing begs the question :: is there hidden value in Whiting’s un-drilled acreage worth bidding on? 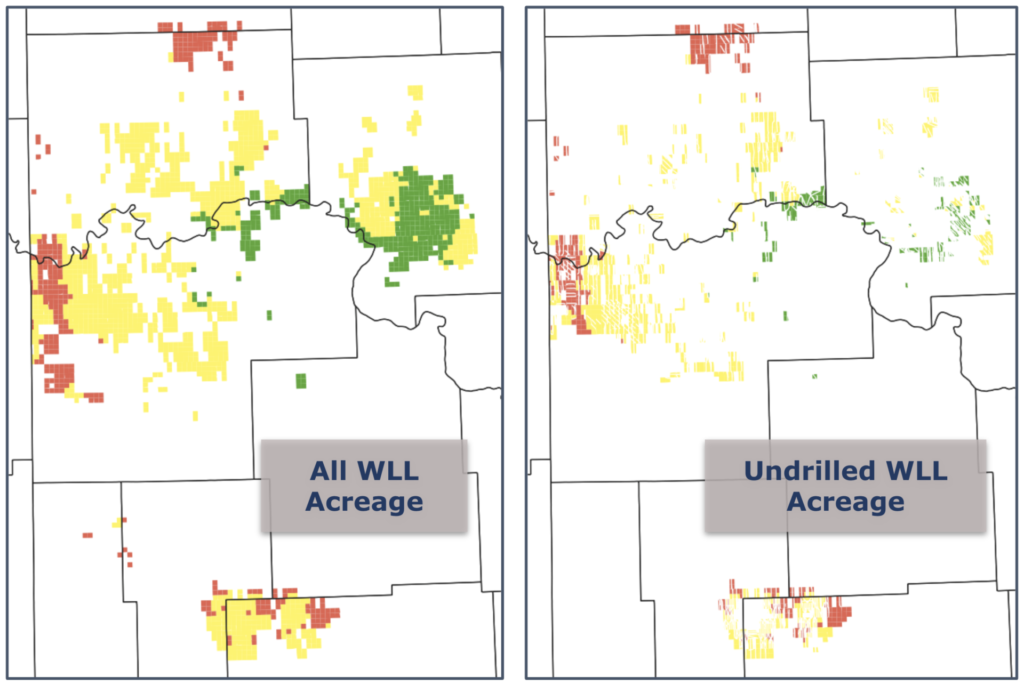 Earlier this month, Whiting Petroleum (NYSE: WLL) declared bankruptcy, becoming the first high-profile E&P casualty in the Coronavirus downturn. While it’s unclear how exactly the Chapter 11 process will turn out, we’ve taken the opportunity to dig through their inventory looking for potential bargains using our machine learning software. We calculated breakeven prices for their four big remaining acreage chunks, and while almost all the open acreage fails to breakeven at $60/bbl, the inventory along the river offers decent returns at $55-60 for operators willing to brave the complex surface issues.

Two weeks before the bankruptcy announcement, we posted that the Bakken Core was running out. Whiting is certainly not exempt from that conclusion, having drilled up much of their core Sanish/Parshall acreage (they also divested some excellent acreage to RimRock, more on that in a coming post).

The North Dakota Industrial Commission (NDIC) provides one of the best state-level datasets, and Novi has built a model covering the entirety of the (North Dakota) Williston. We used Novi Forecast Engine to analyze their acreage and generate economics, in the same way our Customers use our software to perform this type of analysis. The following video walks you through how we built these forecasts:

Across the four areas, the Novi Model shows that the best acreage is located in the Parshall Infill and East Hidden Bench areas. Next, we’ll go into more detail about the predictions and economics.

Parshall Infill wells perform the best, showing a (30% IRR) breakeven at $50/bbl, with East Hidden Bench wells breaking even at a ~$55 strip. Neither the Northern wells nor the Missouri Breaks wells break 30%, even at $60/bbl.

A Bit More on ‘Hidden Bench’

The Parshall/Sanish infill opportunity fits neatly into the legacy field playbook — buy a developed field with declining production, drill some infill wells, keep costs down. Of the “new drill” opportunities, the East Hidden Bench / East Polar area has the highest returns–but the inventory has likely slid down Whiting’s priority due to tough surface conditions: a lake surrounded with rugged topography, state parks, and national forest.

This area also differs from the other Whiting acreage in being deeper and gassier. This could make for operational headaches — or if you have a bullish case on regional gas pricing, it could be a benefit to a buyer.

With per-well NPVs $1-2MM better than Missouri Breaks or the Northern acreage, the Hidden Bench wells will still be more economic even with higher pad construction costs. Given that PUDs are going for $0 in today’s market, the exposure to execution risk is minimal, and the upside is some of the last remaining Tier 1 acreage in the basin.

As the completion uplift varies around the basin, so do returns with respect to completions designs. At $60/bbl, our model shows best returns at 1100#/ft for the Parshall Infill and North Nesson/North Polar areas. East Hidden Bench prefers the smallest design, perhaps because the higher lighter fluids require a less-intense stimulation.

Whiting, in recent years, has dropped their average proppant loading from 1100 to 700 #/ft. These results suggest it may have been a mistake to do so across the board, and a tailored approach offers improved returns. With sand prices likely to fall commensurately with frac activity, operators may be able boost production by 20-30% at an assumed lower materials cost. Although we did not model this reduced materials cost case, we easily could have. Water costs and completions-driven water production increases also factor into these changing economics.