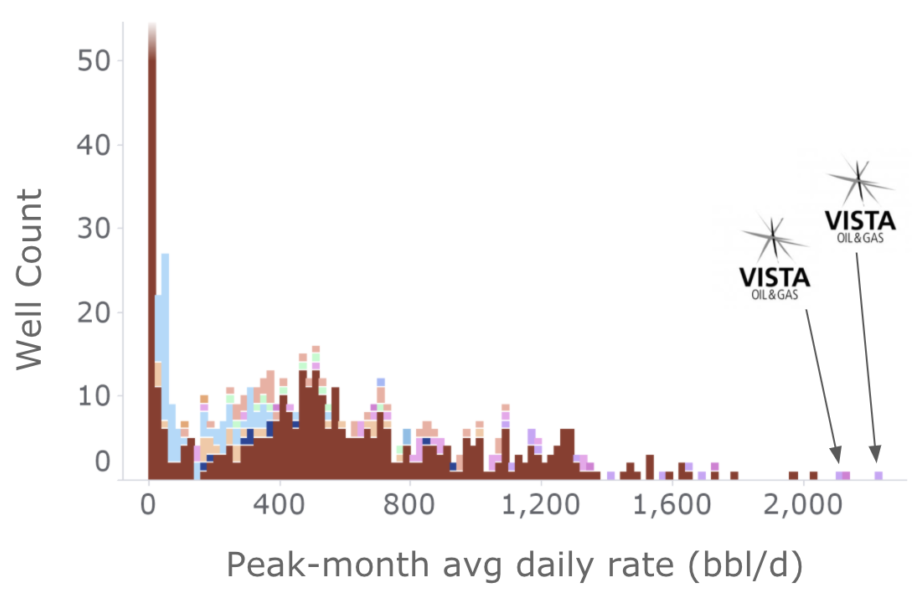 After the Great Coronavirus Shut-In, Vista Oil & Gas turned back on their new Vaca Muerta pad. A pleasant surprise greeted them. Their oil and gas machine learning model showed the highest production the play had ever seen. Both the MDM-2063 and MDM-2061 wells produced over 2,000 bbl/d on average for the month, with peak daily rates breaching 3,000 boe/d.

Why did these wells produce so much? Was it a novel completion design, a geologic hot spot, or a heavy tailwind of flush production? Lets explore this oil and gas machine learning use case. We will put these wells under the microscope with our Vaca Muerta public-data model.

Background: Vista and their record-setting pad

Vista Oil & Gas is led by the former CEO of YPF, Miguel Galuccio. Originally backed by Riverstone and the Abu Dhabi investment council, Vista pitches itself as ‘the only pure shale play of Vaca Muerta listed on the New York Stock Exchange’. The company has over 137,000 acres in the play, along with some legacy production (mostly located in the Neuquen Basin). That background alone makes the company worth following.

Vista has brought on three Vaca Muerta Pads, with the latest coming online in February. The first two pads had strong results, but the third.…was excellent.

Let’s take a look in a little more detail at Vista’s record-setting pad. When we build a machine learning oil and gas data model, we also produce a cleaned, joined one-line file that is published to Novi Cloud. This is a great dataset for competitor surveillance. Their two La Cocina wells set records while their two Orgánico target wells produced significantly less.

The record-setting wells were long laterals with BIG jobs: 8,871′ and 9,839′ length, with 2,750 #/ft proppant and ~2,400 gal/ft fluid loading. Furthermore, these put them near the high end of North American designs. As the visualization below shows, they’re at the far high end for all Vaca Muerta wells.

This quick data exploration using Novi Cloud outputs gives us a straightforward line of investigation. How much did the huge design impact the production?

One of the most common use cases of our ML models and Novi Cloud data outputs is investigating outlier performance. In truth, we don’t even like to talk about outlier production values, so long as there’s not a true issue with the data, like a transcription error. “Outlier” producers often have something to teach us, and too much hand-curation of data can open the door to bias.

Each model we train learns what drives performance by intelligently splitting and grouping wells across the training variables. This is similar to what a reservoir engineer would do in an analog type curve process, just at computerized speed.

Firstly for this model, we included proppant loading, fluid loading, stage length, and some publicly available geologic grids for training data. Secondly, all our model training is done in lateral, length normalized space. Thirdly, we predict per-foot production using per-foot completions variables, (we find this gives better model results–reach out if you’d like to learn more). Finally, after normalizing for lateral length, the Vista wells fall slightly off of their perch at the top:

Next, let’s look at the model forecasts for the Vista wells. During training, the model will make a forecast for every well. For each well on the pad, the model forecasts are broadly in line with what the wells have been producing. Our model expects these wells to be monsters, with over 200,000 bbl 6-month cumulative production. The most recent (peak) month does show higher than expected production–though only when viewed with the downtime corrected.

Disentangling the role of flush production in driving these rates to stratospheric heights is tough off of public data. For instance, it’s lacking daily production and lacking pressure measurements. However, Vista’s Q2 investor deck shows significant flush production from their 1st and 2nd pads. Pad 2, which is closer geographically to Pad 3 (the record pad), also has similar completions designs. Surprisingly, It nearly returned to its peak rate after shut-in. So, it seems likely that flush production has played a role in driving these Vista wells to stratospheric rates.

After model training, we turn the oil and gas machine learning model learnings into a powerful reconnaissance dataset with Shapley values. The Shapley value (or SHAP value) estimates how much each variable impacted the model forecast. Additionally, it shows how much it moved the forecast away from the average well’s production for that IP Day. SHAP values are expressed in units of production (bbl or mcf) and can be positive or negative. For example, they can be used for completions sensitivities, studying the changing impact of variables through time, or researching variable interaction.

On an individual well basis, you can look at the SHAP values to see how the model came up with its forecast for that well. For the Vista wells, the geology and completions design both have a strong positive force on the prediction.

Looking at the above SHAP plots, it’s clear that the geology at the Pad 3 location is a main driver of the well performance. But, just how good are the rocks compared to the rest of the play?

We will use the SHAP values for the training geologic parameters to estimate the total rock quality. This is what we term geoSHAP. The plot below shows geoSHAP for every well drilled in the play. The bimodal distribution reflects the windows of the play. This is rock quality for producing oil (the chart would look similar for our Vaca Muerta gas model outputs). Vista’s rock quality at those well locations is great — though not as good as at their earlier pads.

Of course, that leads to a question. If the rock quality at Vista’s earlier locations was better, why is Pad 3 the one setting records??

The answer: Vista has been drilling longer laterals and trialing larger completions. Plus those pads did not see flush production coincide with their peak month, of course.

Vista’s second pad outperformed their first pad despite having laterals that were 1,500′ shorter, on average. This is because Vista’s larger V2 completion design was trialed. For their third pad, they set records with the MDM-2061 and MDM-2063 wells, both long laterals with V2 designs. However, Vista snuck in another “larger job, shorter lateral” trial.

This time they pushed proppant to a staggering 4,100 pounds per foot, and shortening stages to 130 ft. Early results look promising. The MDM-2064 produces about the same amount as the MDM-2062 (both Orgánico tests), despite a much shorter lateral. Will these results hold? Let’s take a look at the oil and gas machine learning SHAP values at two timesteps: periods of six months and three years.

Haynesville – update through May 2020