What can chess teach us about artificial intelligence in oil and gas? 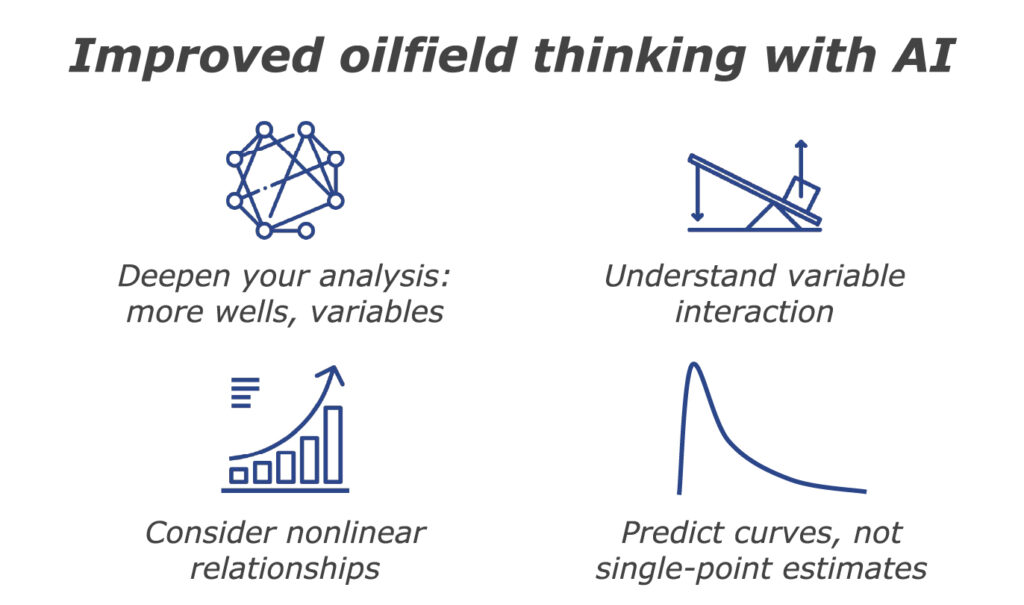 In case you haven’t noticed, chess has been seeing unprecedented growth around the world. A boom that started with bored lockdowners looking for a meaningful way to pass the time had jet fuel poured on it with the tremendous success of Netflix’s The Queen’s Gambit. If, like me, you haven’t seriously played chess since you were young, you may find the advancements in chess artificial intelligence (or chess “engines”) incredible. But can chess teach us about the future of artificial intelligence in oil and gas?

Chess has long been a focus of artificial intelligence research. The game offers both clear rules (to easily measure success) and sufficient complexity (with at least 10^120 possible moves, no computer will ever be able to “solve” the game, unlike checkers). We certainly have complexity in the oilfield – but we also have the ability to measure success in the form of barrels produced, feet of pay encountered, or time to process a seismic volume.

In this post, we’ll walk through the latest AI developments in chess and how they might impact the oilfield.

How AI has improved human thinking in chess

Artificial intelligence chess play has changed improved dramatically since 1997, when Deep Blue beat the reigning world champion Garry Kasparov . Known colloquially as “engines,” chess artificial intelligences now top out at an ELO rating of over 3700, far beyond Magnus Carlsen’s best-ever human rating of 2882. However, these engines haven’t been operating in isolation – human play has learned quite a bit from them.

In chess, much of that improvement has come from a deepened tactical analysis. Now, when a grandmaster studies a variation on a popular opening line, they can supplement their own research with the AI perspective. Does white have a seemingly unsurmountable attack? Perhaps black can play a tightly choreographed defense and emerge with a winning position. Artificial intelligence can look at orders of magnitude more possibilities than a human.

Watching super-grandmaster play these days, you may hear the commentators say “wow, that’s a total engine move.” That phrase can be both a sign of respect of the move quality or an acknowledgement of the method by which the move was prepared. An “engine move” is initially surprising, but its purpose becomes clear soon enough.

Using ML to think deeper in the Oilfield

“Thinking deeper” in chess is analogous to “consider more variables and more wells” in the oilfield. Humans struggle when the dimensionality of the problem gets beyond three or four – how can you control for proppant volume, fluid volume, fluid chemistry, frac rate, oil in place, brittleness, frac barriers, permeability, parent depletion, presence of a staggered neighbor, lateral neighbor distance, and operational choices all in your head?

Furthermore, digital oilfield artificial intelligence applications excel at analyzing nonlinear relationships and variable interactions. Each additional layer of complexity makes it more difficult for a human engineer or geoscientist to grasp the problem. Considering everything we have laid out above is difficult enough. When you add in the time dimension… good luck handling that without AI.

The power of continuous feedback

The typical live broadcast of a chess game in 2020 contains several components. You have the board, of course, and the time control. Second, you have a poorly-lit livestream of the players. Third, you have the commentators chattering away and drawing on the virtual board (Madden would be proud). Finally, there is the live engine assessment of who is winning (black and white bar on the far left):

The engine view on the victory probabilities goes way beyond simply counting the “material”. With traditional chess scorekeeping, each piece has a value. Queens are worth nine, rooks worth five, knights three, etc. This method fails to take into account positional advantages; if the opponent has enough pieces lined up to checkmate your exposed king, it doesn’t matter how many pieces you have on the other side of the board.

This AI-driven breakthrough in live viewing has helped tremendously to quantify victory probabilities. But this “live feedback” is even more impactful on your own games. Did you somehow lose an endgame that you started with an advantage? Immediately after your game concludes, the engine can analyze your play and show you exactly where you went wrong. Even beyond that, the engine can suggest a better move, or you can play some possible lines against the engine. This continuous feedback is invaluable to the learning player.

How can Continuous feedback be applied in Oil & Gas?

Unfortunately, it may take months or even years between when a design decision is made and when the results are in. AI applications provide several ways to shorten and improve that feedback loop. First, machine learning can generate an accurate, unbiased baseline forecast. This can serve as an effective benchmark to measure when and where things are going wrong. Second, with automated forecasts you can understand the implications to your quarterly forecasts or reserves much earlier than when your reservoir engineer gets around to it.

Finally, when new data come in, you retrain the model! The whole point of artificial intelligence is that it learns. With cloud compute, models can be trained in minutes or hours, far faster than it takes an engineer to re-do their completions sensitivity analysis. This means you can learn whether those new well results represent a new completions paradigm — or a flash in the pan driven by a local sweet spot. If there’s one key impact of artificial intelligence on the oil and gas industry, it may be improvement and acceleration of learnings.

The future is here: human-AI collaboration

The great fear with chess engines is that they would so blow humans out of the water, or perfect play so much as to destroy the game at the top levels. While the top “engine” rankings have added ground over top human grandmasters, the game is flourishing, even as it changes. Top games (in part due to this year’s shift to online chess) have been played with much shorter time control (think 20 minutes, or 5 minutes, or 1 minute, vs. day-long think-fests). The variant of “Fischer Random” chess, where the pieces behind the pawns are randomized, has also grown more popular at top levels – an example of opening up the game to more strategic, rather than tactical questions.

From the oilfield perspective, we should be interested in what’s happening at the highest levels of play – of course we aspire to identifying opportunities, developing acreage, and managing fields in the best manner possible. And, even though Engines dominate the highest levels of play, humans still design and implement the engines! But I want to spend a little time on a variation of highest-level chess known as “freestyle” or “centaur” chess.

In these competitions, humans and machines play together – it’s not simply a matter of pressing play on the engine—the human works with one or more engines, reviews their moves, and ultimately chooses the play. The power here is in the human’s “metacognition” – knowing the engine’s blind spots and its strengths. A neural net engine, for instance, may be stronger in the strategy-dominated opening where a brute force computational engine may be better in a tactical middle-game. Former world champion (and Deep Blue victim) Garry Kasparov thinks that this “augmented intelligence” is the future:

“I lost but I survived, and I thought if you can’t beat them, join them. From now we on we have no choice but to work with machines and make the best algorithms”

Winning with AI in oil and gas

The parallels to the oilfield are obvious – especially when you think of the vastly more complex “game” that we play. Across the entire life cycle from subsurface to sales, each problem will have its own rules and challenges. And so the companies that “win” will need to understand when and where to apply the many approaches at their disposal, whether that’s AI, physics-based modeling, simple Excel spreadsheets, or good old-fashioned strategic thinking.

No one thinks that the future of artificial intelligence in oil and gas is computers running the show from lease to sales. But the winning companies will excel in algorithm development, selection, and integration.

Conclusions: how will artificial intelligence shake up the oil and gas industry?

The future is bright for companies willing to embrace artificial intelligence applications in oil and gas. Chess provides a shining example of a field thriving with the help of AI and algorithms.