This guide provides information about the Haynesville Basin, oil and gas data, history, top operators and other facts. 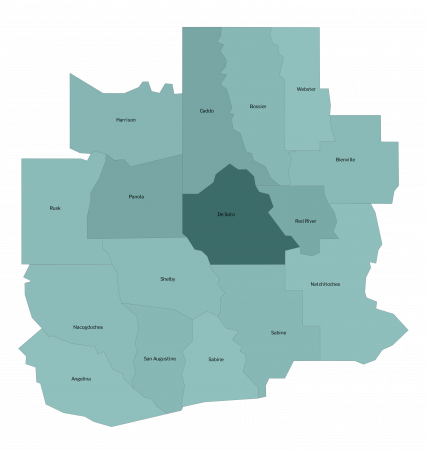 The Haynesville is a Jurassic Period rock formation that underlies southwestern Arkansas, northwest Louisiana, and East Texas. It is located 10,500 to 13,000 feet beneath the surface of the earth.

Drilling and finishing a conventional horizontal Haynesville well typically costs between US$7 million and $8 million, largely depending on lateral length, drilling costs, and pressure pumping services. The Haynesville Shale's overpressurization is one of its key properties, which has helped to produce some extremely high initial production rates.

What is the Haynesville Basin?

On the border of Texas and Louisiana, The Haynesville Basin covers 23 counties. It averages 200 to 300 feet thick and covers an area of around 9,000 square miles. The Cotton Valley Group sandstone lies on top of the Haynesville Shale, which is buried beneath the Smackover Formation limestone. The Haynesville was deposited in a subbasin of the broader Gulf Coast Basin, which formed as a result of the breakup of Pangea and rifting of the Yucatan away from the US.

Through conventional wells, the region has produced natural gas and oil for many years. From a portion of the Texas-Louisiana-Mississippi Salt Basin, these wells extract gas and oil. Drilling has concentrated on the salt basin and the unconventional resources of the Haynesville Shale over the past ten years.

Chesapeake Energy discovered the play at the beginning of 2008, which resulted in a significant uptick in local leasing activity. Another gas formation just above the Haynesville, the Bossier Shale, has also been successfully developed by operators. Many refer to the play as the Haynesville/Bossier Shale, despite the fact that they are two distinct producing formations.

Since 2008, production has increased dramatically, minting several new millionaires in the Shreveport, Louisiana, area. In November 2011, the amount of gas produced in the Haynesville peaked at 7.2 billion cubic feet per day. 9.3% of the US’s total gas production, or 6.2 billion cubic feet per day, was produced in January 2013 from this formation.

Production in the Haynesville has gone through two distinct phases, with an early peak in 2011 and huge production growth from 2017 through today bringing total production up to 12 bcf/d. The second phase has been driven by both well productivity improvements and developments at the surface.

Longer laterals and VERY intense completions have resulted in large production improvements. The Haynesville stands alone with many wells completed with over 3,500 lbs/ft of proppant. This type of completing results in the Haynesville wells having production in the ballpark of the Marcellus – a huge accomplishment.

At the same time, the Haynesville has benefited from better price differentials and offtake capacity. The Haynesville is situated adjacent to the Gulf Coast market, and producers realize pricing very close to Henry Hub. Additionally, LNG export terminals have been built and more are under construction in the area, providing another offtake option and improving local prices.

Gas production over the last 10 years

We offer the most up-to-date, accurate and complete oil & gas data on the market.

Getting the Haynesville oil & gas data you need shouldn’t be difficult. Some of the top E&P operators like Shell, BlueOx Resources and Bedrock Energy partner are already using Novi Labs to track major oil & gas trends up to well level.

Want to discover why E&P operators and mineral & royalty owners are turning to Novi Labs to gain a competitive edge?

This interactive presentation contains the latest ...