This guide provides information about the Bakken Basin, oil and gas data, history, top operators and other facts. 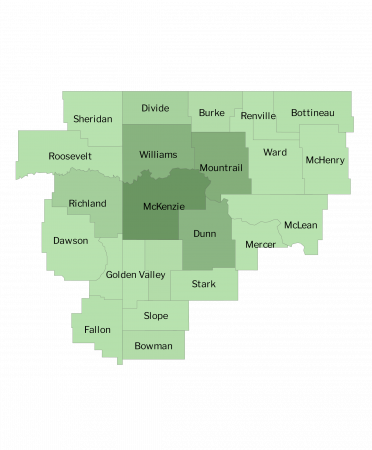 Located in eastern Montana, western North Dakota, South Dakota, and southern Saskatchewan, the Bakken or Williston Basin is a sizable intracratonic sedimentary basin that is well-known for its abundant resources of potash and petroleum. The Missouri River cuts through the basin, which is a geologic structural basin rather than a geographical depression. The oval-shaped depression stretches for around 475 miles from north to south and 300 miles from east to west.

About 3.8 billion barrels of oil and 470 billion cubic feet of natural gas have been produced cumulatively from the basin

What is the Bakken Basin?

The Bakken or Williston Basin is a significant petroleum producer. Natural gas and oil are extracted from the basin’s uppermost sand layers and deep limestone strata. The majority of oil-bearing zones were deposited during basin formation in the Paleozoic, but later structural traps were created by the rock folding and faulting during the development of the Rocky Mountains.

The basin is characterized by thick sequences of sediments that underlie an area of about 110,000 square miles.

Canada is the largest producer of potash in the world thanks to the Williston Basin. The Middle Devonian Prairie Formation is where the sediments are found. Companies that produce a lot of potash include Nutrien and Mosaic.

Large coal deposits are found in the Williston Basin, particularly in the Fort Union Formation, which is primarily Paleogene in age. They were discovered during the Lewis and Clark Expedition. In the vicinity of Sims, North Dakota, coal mining started in 1873 but was quickly stopped. As the Northern Pacific Coal Company, the Northern Pacific Railway took over the mine and developed the lignite beds. The area around Minot and Dickinson, North Dakota, saw the opening of additional mines, and the lignite industry expanded significantly between 1900 and 1920. Since then, it has experienced booms and busts.

Significant Helium concentrations were found in southwest Saskatchewan in 1952. Four wells were used for production between 1963 and 1977, and again in 2014. The maximum concentration was found in the Deadwood Formation and other Lower Paleozoic formations. In Precambrian granitic basement rocks, also known as Lower Paleozoic shales, uranium and thorium underwent natural radioactive decay to produce helium.

The Williston Basin is found above an ancient Precambrian geologic basement feature, the Trans-Hudson Orogenic Belt, which was formed between 1.8 and 1.9 billion years ago. Between 472 million and 462 million years ago, the land began to gently sag downward. This process is thought to have started during the Middle Ordovician Epoch. Over the course of the following 400 million years, the basin was periodically covered by rising seas, which caused a slow deposit of marine sediments.

In 1913, shallow gas was discovered in an Upper Cretaceous sandstone on the Cedar Creek Anticline, and oil was discovered on the same anticline in 1936. Large fields were not discovered in North Dakota until the 1950s, when the basin started to develop into a significant oil-producing area. In 1946, Amerada Corporation started exploring the basin. They began drilling at a promising lease 30 miles northeast of Williston, North Dakota. After four years of testing and mapping, n April 4, 1951, the Amerada Hess Corporation Clarence Iverson #1 well struck oil on the Nesson Anticline.

In Billings County’s Red River Formation, oil was found in 1968. The highly successful output was driven by the Red River discovery as well as the Bell Creek Field discovery. In 1968 oil was discovered in the Red River Formation in Billings county, with the discovery of Bell Creek Field. The Red Wing Creek Field, a complicated geological structure with a pay section that was 1,000 feet thick, was found in 1972. A year later, because the Arab Oil Embargo was implemented exploration, increased and the Billings anticline complex, Mondak field, and the Knife field were discovered. Finally, production began in the Bakken. The discovery of the Dickinson Lodgepole Field along with the discovery of the Red River “B” Pool in Bowman County.

Production reached its high in 1986, although in the early 2000s, there was a noticeable increase in production thanks to the introduction of horizontal drilling methods, particularly in the Bakken Formation. And although during Covid there was a decrease in rig counts, it’s been increasing this past year [Chart below].

Gas production over the last 10 years

We offer the most up-to-date, accurate and complete oil & gas data on the market.

Getting the Williston oil & gas data you need shouldn’t be difficult. Some of the top E&P operators like Shell, BlueOx Resources and Bedrock Energy partner are already using Novi Labs to track major oil & gas trends up to well level.

Want to discover why E&P operators and mineral & royalty owners are turning to Novi Labs to gain a competitive edge? 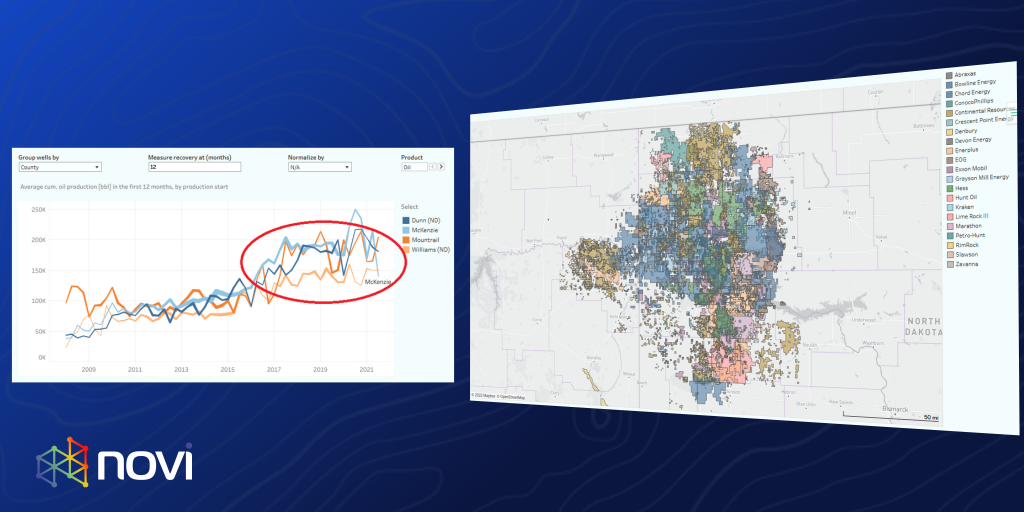 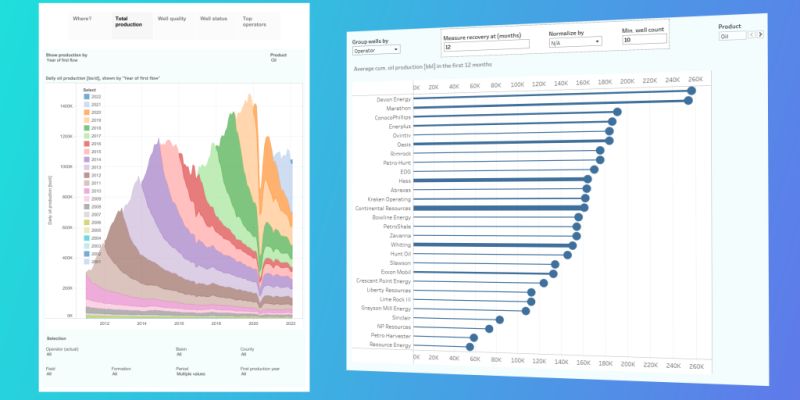